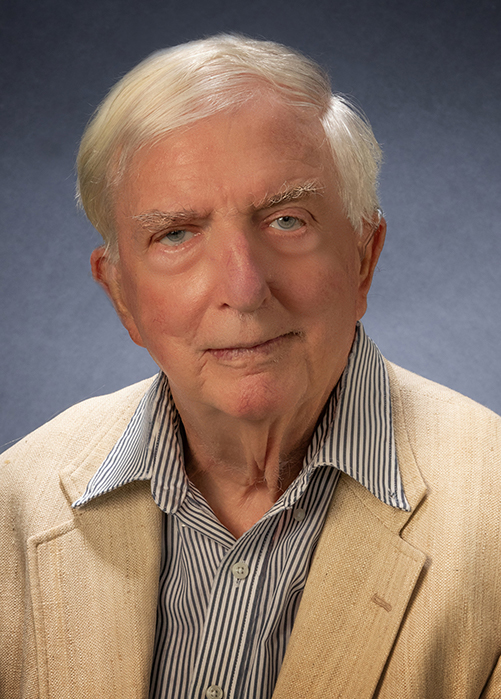 Fire in the Forest incorporates the experience of its designers, Moorhead Kennedy, Martha M. Keys, Thomas Pliske, and Diana Shannon. Twenty years in the U.S. Foreign Service culminating in hostage captivity in Iran, convinced Kennedy of the need for greater understanding of the developing world. He has extensive experience with development issues, including environmental protection, poverty and land use. Before his hostage captivity, he served as director of the Office of Investment Affairs for the Department of State and economic counselor of the U.S. Embassy in Chile.

Twenty years as a teacher and counselor equipped Keys to translate this goal into numerous educational programs. Pliske has spent fifty years as an ecological researcher and environmental educator with decades working in Latin America and with indigenous peoples. Shannon enjoys an international reputation as a developer of educational tools and simulations for over thirty years.

Moorhead Kennedy spent more than twenty years in the U.S. Foreign Service, serving in Yemen, Greece, Lebanon, Chile, and finally Iran. In Washington, he founded and served as the first director of the Office of Investment Affairs of the Department of State and studied at the National War College.

He is the author of Ayatollah in the Cathedral: Reflections of a Hostage, and (with Terrell E. Arnold) Terrorism: The New Warfare. Having majored in Oriental Studies at Princeton University, he took his J.D. from Harvard Law School where he specialized and subsequently published in the field of Islamic Law. He holds honorary degrees from Middlebury College and the University of Pittsburgh. He served for many years on the Maine Library Commission.

Moorhead Kennedy emerged from hostage captivity in Iran persuaded that among the causes of that national humiliation was a lack of understanding on the part of the American people of international affairs. Since 1987, he has been working with Martha M. Keys designing and presenting nation-wide critical issue role play simulations.

Martha Keys has worked over twenty years in education as a teacher, counselor, multi-media and administrator with experience in secondary through university. She received her masters degree from the University of Rochester in non-verbal communication and her doctorate from West Coast University in Curriculum Design.

While working at Stanford University as a counselor she produced a documentary film, “The Factory: A Feeling of Belonging” which was a demonstration of Abraham Maslow’s management theories. It was presented as a business case study at Stanford. As a result, she consulted with Levi Strauss and other corporations.

In New York Martha joined Donald Keys with Planetary Citizens, a non-governmental organization with the United Nations. She served as Vice-President. To increase understanding in global issues, she founded a forum for the wives of Ambassadors presenting topics ranging from nuclear disarmament, environment, and population to health. She represented the forum at the Women’s Conference in Copenhagen and was a panel participant. Trained in the martial arts with a brown belt in Aikido, she set up symposia for the United Nations peacekeeping forces. She also introduced Bogdan Maglich’s program in fusion energy to UN ambassadors. During summers she found time to skipper her own Olympic class sailing yacht in the Olympic Trials in Long Beach.

After Donald Keys retirement, Martha joined Moorhead Kennedy to form the Moorhead Kennedy Institute, a branch of the American Forum for Global Education in New York City. Her doctoral dissertation measured attitudinal change as a result of role play simulations. The simulation, “Hostage Crisis”, based on Kennedy’s experience, has been published in the North American Simulation and Gaming Association and by the USSR State Committee for Public Education.

During this time she founded the non-profit Something In Common, to educate and present solutions to the public concerning the environment, clean water, housing, and public health. Due to the current situation in the Amazon, the Kennedy-Keys signature game, Fire in the Forest, has now been significantly updated and republished for virtual and on-site presentations through Something In Common.

For the past fifty years, Thomas Pliske has been a university professor, primarily at Florida International University in Miami. He is a founding member of FIU’s Environmental Studies Program and has taught undergraduate environmental studies courses such as sustainability, deep ecology, energy resources, ecology of south Florida and environmental education.

He has conducted ecological research in Venezuela, Costa Rica, Guyana, Panama and Ecuador working with local indigenous peoples and published numerous scientific articles and reviews. In the 1980s, he was a project developer and negotiator in Costa Rica and Honduras for the university’s International Affairs Office and was sponsored by UNEP to report the progress of these initiatives at a conference in Wiesbaden, Germany. From 2015–2018 he taught studies abroad in Costa Rica on the themes of environmental conservation and sustainability.

Recently, he has taken an active role in global environmental issues and currently is an adviser to FIU’s Global Indigenous Forum and the Spirituality and Sustainability Global Network. He was an invited presenter at the Assisi Spirituality and Sustainability Conferences in Italy 2018–2019. His two recent books, Light, Truth and Nature and A Himalayan Hope and a Himalayan Promise focus on exploring the role of humanity in global ecosystems from the viewpoints of major spiritual traditions — East, West, and Indigenous.

Diana Shannon is an award-winning designer and educator, collaborating with a wide variety of expert partners around the world in the development of over fifty educational tools and materials. Her work integrates critical and emerging topics across a diversity of fields such as the environment, personal health, and finance. Clients for her notable environment and development-oriented simulation games include the US Environmental Protection Agency, US Agency for International Development, US Department of Education, UN Environment Program, UN Development Program, UN Industrial Development Organization, and World Health Organization.

Ms. Shannon has expertise in print, web, and interactive media, including software and mobile development as well as graphic design and print production. She holds an engineering degree from Dartmouth College and has studied at the School of Visual Arts in New York. She teaches yoga and spent a decade as head of internet technology while organizing international yoga conferences. She also develops assistive devices for humans and animals with disabilities. She is an avid gardener with a passion for sustainable agricultural practices.

Once again I understood the necessity to consider social, economic , cultural differences in the context of communication with people from other countries, cultures, and social levels.

To this day, the Amazon remains the most endangered rainforest on the planet. Fire in the Forest catalyzes engagement in diverse, interconnected, and pressing challenges, facilitating global impact via local action.

Fire in the Forest is a project of Something In Common, a tax-exempt non-profit 501(c)(3) organization.